Never underestimate the effect a cable can have on your IEMs. I recently compared the Effect Audio Ares II to the Eros II. And the upgrade to the Eros II created a vast improvement in sound. So, I was curious to see what would happen as I moved up the Effect Audio ladder. Much has been written about these cables. So, this review is for folks who are familiar with at least one of these models, but are scared to pull the trigger. At 400 bucks, the Eros II+ and the Thor Silver II are at the same price point. Let’s figure out which cable is right for you in this Effect Audio Eros II+ vs Thor Silver II Review. 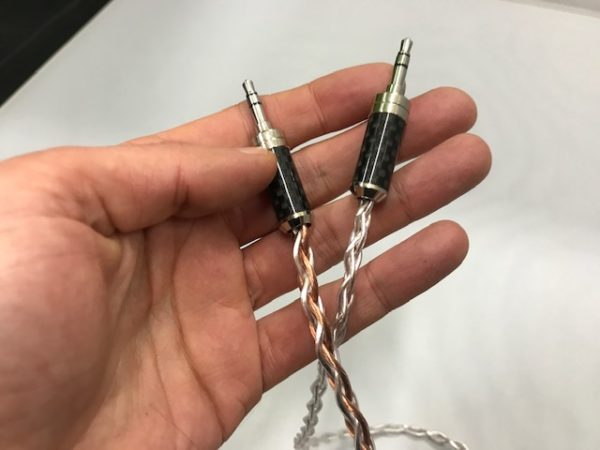 According to Effect Audio, what can you expect from these two cables? The Eros II+ is said to supersize the quality of the Ares II. It should provide “alluring vocals,” tons of bass punch, great balance and a better soundstage. In comparison, the Thor Silver II promises to deliver sweet smoothness, and reduced sibilance. In addition, you can expect other upgrades to the original Thor Silver, like better staging, balance and more “vocal allure.” Beggars can’t be choosers, and I didn’t have two of the same Empire Ears buds (or other 2-pins) for a comparison. But I had two Campfire Andromeda’s to play around with, so I hooked them up to each of the cables for a fair AB comparison. Note to all Andromeda owners: these two Effect Audio cables make these green babies so active that, for some, it might overwhelming on the ears. So, as one Campfire fan to another, I suggest sticking with ALO cables. The two brands go together like milk and honey. But if you pair these cables with the right buds, you may be blown away by what these two models can do.

You’ll get deeper and fatter lows from the Eros II+, while the Thor Silver II has a more natural feel that drops some of the weight exhibited by the Eros II+. If you’re a hip-hop fan, you’ll enjoy that extra sub frequency extension on the Eros II+. And I bet if you hook it up to your Legend X, you’ll start to feel your love handles vibrate. Also in this range, you’ll sense a broader scope of sound from acoustic instruments on the Eros II+. Cellos, for example, sound more majestic and absolute in their presentation. At the same time, the Eros II+ also presented the cleaner or more delineated bassline. Listening to The Beatles’ Come Together on the Eros II+, the bass and toms were tighter with better separation. In comparison, the Thor Silver II was less disciplined.

Listening to strings, both cables displayed a similar amount of transparency. But again, I got just a little more detail from the Eros II+, while the Thor Silver II conveyed a more fluid and polished feel. Moving up to the highest registers I thought the Thor Silver II might be slightly more forgiving on the ears, but listening to high pitched trumpets, I didn’t find the Eros II+ more piercing than the Silver II. And there was little sibilance to speak of on both models. However, what you may notice is that, at times, you’ll get a touch more crystal-like sparkle from the Thor Silver II when listening to snappy pop tracks with high pitched percussion, while the Eros II+ feels just slightly more blunted.

If you want to go bold, the Eros II+ is your cable. It delivers big sound with rich lows, incredible separation, detail and soundstage.  But if you prefer something smoother, less weighty, and more moderate in personality, you can’t go wrong with the Thor Silver II. It will still give you fantastic detail, but it won’t blow you out of your chair.

You can pick up both of the cables for the best price here: