Taotronics has a wide selection of true wireless earbuds, with their Soundliberty series being among its most successful. Although Taotronics has made some good and functional earbuds, in my opinion they’ve never produced a hit with me. I’ve now gotten a chance to listen to the Soundliberty Pro P10, a new noise-canceling true wireless for the generous price of $64.99. Their products have always been inexpensive, but this is almost a giveaway. However, is the P10 a good value? 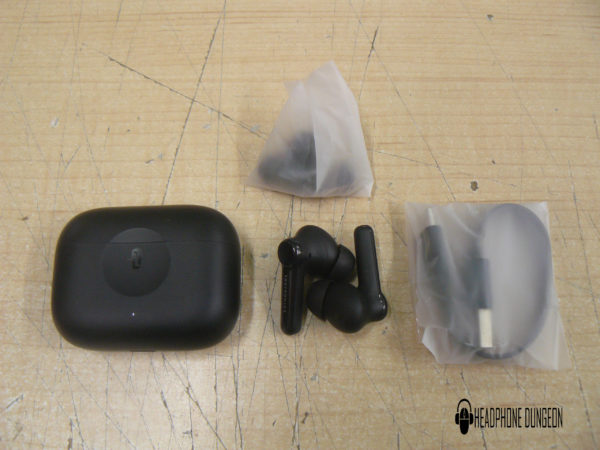 The earbuds feature a stemmed design and an oval-shaped housing. Its stem leaves an indented circle for easier access to the P10’s touch-sensitive interface. They have a simple look, but it is their sleekest earbuds yet, with a solid black gloss that makes them appear like more than just a piece of plastic. One of the best parts of this build is how it makes the fit all the more successful. Minus a bit of stretch in the ear cavity, the P10 features a solid level of comfortability. It is a light fit that makes for easy, unobtrusive listening for many hours. With the P10, you get a suitable level of output, helped by a 9mm driver with PU and Peek composite diaphragms. It’s nice to see a bigger driver being used for this price point, as I find some true wireless earbuds have issues with providing enough loudness, Of course, it also insinuates a much more powerful low end. Like many true wireless earbuds, the P10 utilizes a touch-sensitive interface to access playback controls and activate noise-canceling/ambient mode. These controls are highly responsive and activate with little to no delay. Simple taps will bring the volume up or down depending on which earbud you’re using, and double-tapping the right bud will play or pause your current track. Double tapping the left bud will cycle through ambient and noise-canceling modes.

Ambient modes are always welcome with any Bluetooth earphone, but with noise-canceling, its usefulness is more of a concern. I didn’t feel like the noise-canceling here provided substantially more isolation than the P10 already does naturally. I sit near a big air duct, and the higher frequencies it produces were still very present with noise-canceling activated. It’s not ineffective, but it’s the level of noise-canceling I usually expect for a wireless earbud at this price. Pairing the P10 requires you to press the back button on the charging case while the earbuds are inside and the case is open. After doing this, the connection is almost instant. Although most earbuds only require simply taking the earbuds out of the case to pair them, I won’t criticize the P10 for having a stable connection. You can expect to see Bluetooth 5.2 supported, as well as AAC and SBC COCECs. The P10 boasts some great battery life for its price range. With ANC on you’ll be able to do 24 hours of playtime, and with it off you’ll get up to 33 hours. With the P10, Taotronics definitely looks to improve upon the soundstage in their earbuds, as this model successfully communicates spaciousness better than all of their past models that I’ve heard. The amount of width featured here is a lot more extended than in other SoundLiberty earphones but doesn’t go quite as far as other true wireless systems. Its greatest quality is its level of separation, which features plenty of distance between sound elements. Together, the mixes still appear very solid in the imaging, but you are granted a much more fulfilling stereo field. This way instrumentations aren’t fighting for the middle in order to sound punchy, rather they naturally let the frequencies breathe, expressing their detail. I’m very impressed here with the P10’s superior clarity here over their previous iterations.

A thick tonality and an impactful bass response give you the main meat of this sound signature. Its timbre is crisp, and its texture is properly gravelly. Baratnone voices sound extremely pleasant, so find the right audiobook narrator with a rich voice is key here. In fact, I found that spoken work helped bring out the identity of this low-end more than conventional bass instruments. That’s not to say that Hip-hop and Electronic tracks don’t make your head bop, because they a hundred percent do. However, my most memorable listening experience came from voiceovers and general talk.

The P10 avoids a v-shaped sound signature and gives you some respectable midrange goodness to enjoy. Considering the massive bass response, I’m shocked the mids don’t sound recessed or squished together. This range is actually allowed to get a lot of detail across with a clean timbre. Again, I want to point out how great vocal performances sound here. I touched on spoken work, low registers, but general midrange male and female vocals also get tones of rich clarity. They’re presented in a forward fashion with the rest of the frequency information spread spaciously around them. It’s a level of fidelity I’m certainly engaged with.

Treble frequencies take the biggest hit here. The timbre here is smoothed out to the point of sounding hollow. They offer just enough to make the sound signature appear full, but most tracks lack a proper bite here.

Out of all the Taotronics true wireless earbuds I’ve listened to, the P10 has been my favorite so far. I found the sound signature to be the most enjoyable offering so far, with its sense of spaciousness and clarity. The fit and functionality also provide an easy listening experience and are elevated by strong battery life. Noise-canceling leaves some to be desired, but at this generous price, it’s hard to complain.

The Taotronics Soundliberty Pro P10 is available on their website here.