Watch out, Bose and Sony. The German engineers are back in town. Sennheiser has always been the leader in sound. But with respect to noise cancellation and cutting edge wireless technology, some may say that they’ve been falling behind the pack. Well, it seems that they’re done screwing around. Finally, Sennheiser has released a new and improved version of their most famous Bluetooth headphones, the Momentum 3 Wireless. What can you expect in terms of sound and design? Let’s take a closer look in this Sennheiser Momentum 3 Wireless Review. Those familiar with the previous Momentum Wireless model will notice that the earpads on the new model are wider and pudgier. This not only makes for a luxurious fit, but the sound isolation is also improved. It’s quite a snug feel, but it didn’t sit too tight around my ears, and my glasses stayed in place. There may also be another reason for the thicker earpads, but more about this below. The active noise-cancellation on the Momentum 3 is quite a bit more powerful than the previous model. But what I like about the Momentum 3 is that the ANC stops short of becoming uncomfortable; some headphones have such powerful noise-cancelling frequencies, that it creates a pressure in the ears. Still, if the ANC becomes annoying, you can always turn it off. And the previous model didn’t give you this ability.

When you install the accompanying app, you’ll also have the option of adjusting the levels of noise-cancelling strength, depending on your environment. They even have an anti-wind mode. Chicago, your prayers have been answered. Furthermore, Sennheiser has added a Transparent Hearing mode, which lets in sound from the outside.

Noise-cancellation may be another reason why Sennheiser has widened the earpads and made them thicker and snugger around the ears. The problem I had with the previous model was that when I walked or moved my head, the noise-cancelling frequencies would occasionally drop out. It seems that the movement of the earpads (which sat looser around the ears) created air pockets that let in surrounding sound. So, this small issue seems to have been solved with the new model.

Unlike Sony and Bose, Sennheiser has avoided going with touchpad controls. Instead, they’ve employed good ol’ buttons on the side of the earcup. I think this is a good move. It’s true that people get high on swiping these days. But the touchpad controls tend to be very sensitive. And when it comes to models like the Sony WH-1000XM3, I often find myself inadvertently activating functions, which can become frustrating. Using the buttons on the side of the earcups, you can expect all the standard functionality, such play/pause, track skipping, call answering/ending and voice assistant activation. But you’ll also get a few more treats when making phone calls. Now, you can put the caller on hold and mute your voice.

The call clarity is spectacular on on the Momentum 3. In fact, it beats every other wireless headphone I’ve tested in this price range. I called my friend who was at a bachelorette party. And not only did the babbling hens sound crystal clear on my end, but they said they could hear me vaping. I’ve got good news and bad news. The bad news is that the battery life on the Momentum 3 is relatively short when you compare it to other brands’ leading models. In fact, these cans only give you 17 hours of battery life, which is actually less than the playtime offered by their previous version.

But the good news is that you can listen and charge at the same time. The Momentum 3 employs a USB-C connection for charging. In the box, you’ll find a USB-C to USB-C cable, which is perfect for Mac users. But if you’re plugging into a regular USB connection, there’s an included USB adapter. So, yes, you can connect it to your PC or even an old fashioned wall socket. (Yes, you can also connect the headphones via 3.5mm cable, which is included in the box.) 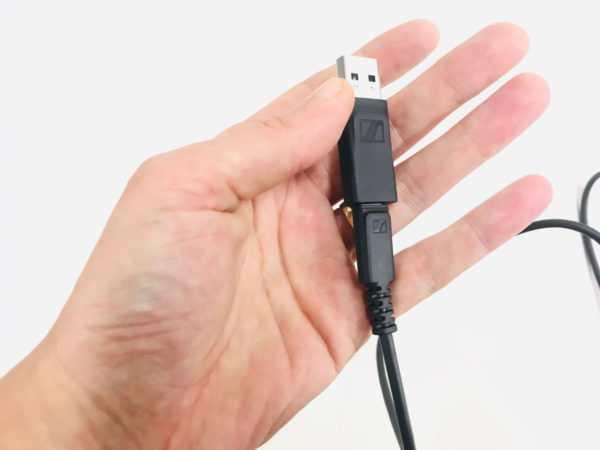 As mentioned above, these cans come with an app (Smart Control) that allows you to adjust ANC levels. But the bigger bonus is the equalizer, which gives you creative control over the balance of your sound. So, bass-heads and bass-phobics can finally live in harmony. The app also gives you control over other features. As mentioned above, you can turn off the Smart Pause feature if it gets too smart for its own good. And you can even change tones and voice prompt languages. Also, you can use this app to install any future firmware updates.

The Momentum 3 Wireless supports SBC, aptX™, aptX™ Low Latency and AAC. So, high-resolution codecs are available for both Apple and Android phones. And if you own an Android, you can rest assured that your videos will play in sync with your audio (using aptX Low Latency).

You can pair the Momentum 3 Wireless with up to two devices simultaneously. And these cans also support NFC (Near Field Communication), which means you can connect to your mobile device by just holding the headphones close to your phone.

This carrying case kind of works like an accordion. It’s bigger than the case that comes with the previous model (because the headphones are bigger). But you can flatten it after you take the headphones out of the bag. The bass on the Momentum 3 is deep and punchy, giving tons of oomph to pop tracks and huge subbiness to hip-hop songs. Of course, you can adjust the bass response with the accompanying equalizer. But the default balance is a damn good time. Do yourself a favor, and listen to Lizzo’s Juice on these cans. It’s more invigorating than three espressos and a line of coke. You may notice that the clarity of the bass improves once the noise-cancelling is switched off. And with the ANC turned off, you’ll also hear a little more detail in string instruments. With the ANC activated, acoustic instruments take on a smoother, less textured character. The low end also lends a lot of richness and warmth to rock tracks. Indeed, the sound is juicy in this range.

The low and high mids are very well balanced, at least for my tastes. The upper mids aren’t overblown, while the low mids are given ample attention. So, there’s no harshness to speak of in the higher frequencies, and rock and pop-rock songs sound full-bodied and well…Massive. Now, I’ve read a few reviews poo-pooing the fidelity of these cans. But let’s be fair. The Momentum 3 Wireless isn’t designed to produce nit-picking audiophile performance. Afterall, they’re ANC wireless. Still, looking at them more critically, yes. You will hear a mild cloudiness when listening to acoustic guitar strums in the low-mids, for example. And acoustic instruments, like cellos, don’t give the most detailed performance. Certainly if you’re looking for something with greater transparency and separation, I recommend the other Germans, Beyerdynamic, who released the very clean sounding Lagoon wireless headphones a few months ago. But especially for modern genres, there’s no denying that these cans are fun.

There’s not too much extension in this range. So, don’t expect a particularly sparkly or bright high-end. But you will get enough crispness to make for snappy pop or funk track. And again, when you turn off the ANC, the highs shine through a touch more. Listening to violins in this range, the level of detail is quite good for a pair of wireless headphones. And with respect to female vocals, performances have plenty of breath and air, making for an emotive ballad.

Now, this category may be one of the reasons I gravitate to these headphones. The Momentum 3 Wireless presents a remarkably spacious soundstage. Live recordings have a stadium like feel. And when you compare the sense of dimension to other wireless headphones in this price range, the Momentum 3 blows them out of the water. In fact, that exapnsive feel I was describing above is partially because the soundstage is so yuge.

Perhaps I’m in an unusually good mood, but I’m sold. Sure, the Momentum 3 Wireless may not have the same level of transparency and separation as you’re used to hearing from a wired Sennheiser. But the balance and incredibly vast soundstage is so delightful to the ears that even a nerdy audiophile like me ends up falling in love. Add to this a ton of functionality, effective ANC and fantastic call clarity, and you’ve got a truly solid headphone for your daily commute or flight to Tokyo.

You can pick up the Momentum 3 Wireless for the best price here: